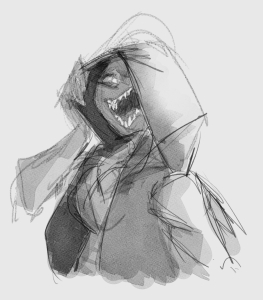 Is he even a deity?

Imm is to gods and worlds, what a biological virus is to a human. A tiny little thing, that isn't even fully considered as living, which can latch onto bigger things, replicate itself and cause irrepairable damage. The only thing he wants is to spread and consume, but as in recent years he has had these covered, he now has the luxury to turn his attention to other things. Like collecting cute little humans. Helping them grow and be happy. So cute with their little tools and their little creations, Imm is obsessed with these hairless monkeys and sees them as his equal. He even takes on a mostly human form as his default, that's how much he likes them. At least he's responsible enough to not get more than he can handle and he does his best to give them a quality life, even though he can't always understand their complex emotions.

He's truely indestructable. No matter the damage he receives, he always recovers and comes back, making him very hard to deal with despite his tiny size. He will outlive any prison and outlast any god, he has nothing but time on his hands. The only time he has been affected by a containment procedure, was when he was trapped in a white room for millenia, with chosen ones hitting his splattered body with hammers repeatedly, damaging him again and again and leaving him no time to fully recover. Eventually he got out, but hammers make him nervous to this day.

The world they live in, dubbed Immortal City, is made by his shapeshifted body and Abe's machines, despite its normal-looking appearance. He's very fond of his tiny little world, as that's something a deity of his size and power shouldn't be able to maintain. Their only problem is providing food and water, as neither him nor Abe can make lasting living things. As a result, he gets really sad when he has to close the world, due to these two being severely injured.