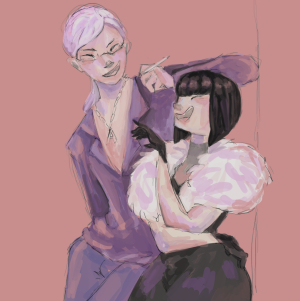 Mirage is a bit of a special case. She's actually a fully grown Immortal Virus, a small deity herslef that can rival Imm if she really puts her all into it, but she chooses to present herself as her former human identity. She knows she's special and will make sure that everyone around her knows it too, with her coy smile and overdeveloped social skills that put a new meaning to having a silver tongue. Her web of connections reaches into almost every world she's even remotely aware about and she has fomed several relegions around herslef in some of them, when she's not contested by other Immortal City members. She's truely unapologetically evil. She loves watching people slowly fall into despair, and she will do anything to cause as much chaos as possible, as the suffering of others brings her entertainment. If you asked her though, she wouldn't call herself a sadist.

Although she's keeping a lot of secrets, her awful personality isn't one of them. There isn't some softer core underneath that will make it all okay, she's not a little girl deep down looking for the right person to love. There's a lot of things she doesn't know about herself though. Her relationship with her emotions is very long-distance, causing her to often lose control of her magic or be unaware that she's casting at all. For that reason, out of all the Immortal City residents, she uses her magic the least, to the point where people will assume she can't at all.